The Khmer Rouge and Cambodian genocide: how the Guardian covered it 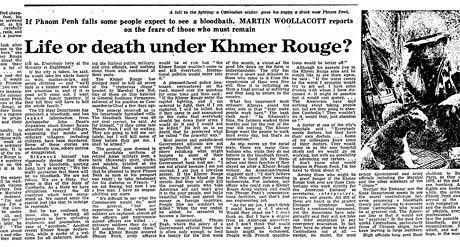 Former Khmer Rouge senior figures Nuon Chea and Khieu Samphan have been found guilty of crimes against humanity and given life imprisonment by a court in Cambodia. Follow how the Guardian covered the brutal regime of the Khmer Rouge as evidence of the killing fields first emerged

The Khmer Rouge is poised to seize power after nearly five years of civil war. The Guardian's Martin Woollacott reports on the fears of a "bloodbath" if they take over. A general tells him that whenever government soldiers are captured "almost all the officers are killed."

A bank worker says: "I am not afraid because I am not corrupt. If the Khmer Rougewin, there will be blood on the streets. But they will only kill the corrupt people who take American aid and don't give it to the poor people."

The Khmer Rouge takes over after a three-month siege of Phnom Penh. There are celebrations on the street and the communists' victory is welcomed by China. "The Chinese people will forever stand by you," Chairman Mao says.
Cambodia is renamed Kampuchea and its new leader, Pol Pot, declares Year Zero.

At least 90 officials from Cambodia's former government are executed "in a systematic process of elimination", according to reports from Thailand. Meanwhile, millions of Cambodians are moved from Phnom Penh to work in the countryside in new rural collectives to stave off a food crisis.

A Guardian editorial notes the reports of mass executions and condemns Cambodia's "ultra-dogmatic attempt to make all society rural". The Khmer Rouge's agricultural policy is defended by Aidan Foster-Carter, from the department of sociology at the University of Leeds. "What the Khmer Rouge government has done is simply to try to ensure that everyone is engaged in productive labour," he says.

Executions are being used as a method of social control, according to a report from Woollacott, citing reports from refugees. "Every disappearance, from village, factory or town, is assumed to have ended in death in some forest clearing or at some river edge," he writes. "There was at least in some regions a police of physical extermination on the worst of the class enemies – army and police officers and, less certainly, civil servants and intellectuals. How far it went, whether the orders came from Phnom Penh or at the initiative or local Khmer Rouge commanders, cannot be measured."

In a series of three articles about life in Cambodia, Woollacott writes that it is a society driven by fear.

A former Khmer Rouge official says he took part in the execution of 5,000 peoplethe previous September.

A group of exiles asks the United Nations to investigate acts of genocide by the Khmer Rouge.

Woollacott says journalists were sceptical of initial fears of a bloodbath in Cambodia. He also notes leftwing support for the Khmer Rouge and a tendency to dismiss reports of executions as CIA fabrications. He admits that he and many others were wrong to doubt the brutality of the Khmer Rouge, after the publication of a book about their atrocities based on interviews with 300 refugees.

"What emerges is a kaleidoscope of horror scenes that stay in the mind long after the book has been been closed ... The heads of 40 young women buried up to their necks and then knifed in the throat, sticking up out of the ground like cabbages; the bayoneting to death of civil servants and their families ...; a gang of eight and 10-year-olds heaving on the gallows rope from the other end of which dangled their schoolmaster."

The Guardian publishes a 4,000-word extract of Cambodia Year Zero, by Francois Ponchaud. It reports claims that up to 1.4 million were killed by the Khmer Rouge. "One or two million young people are enough to make the new Kampuchea!" was the blood-chilling boast of the Khmer Rouge, which they are now turning into a grim reality," it says.

The Khmer Rouge government is overthrown by invading Vietnamese troops. The new government finds dozens of corpses, many bearing the marks of torture.